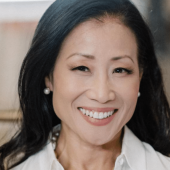 If life hands you lemons, make a lemonade empire!

Award-winning storyteller Christy Hui is a life-long tea lover who learned the art of Gong Fu Cha from her father as a young girl in China. Having immigrated to America as a teenager with her family, Christy embraces both her traditional Chinese roots and work-hard-to-achieve-your-dreams American spirit.

Christy’s most recent creative work is director/producer/writer of 9 DRAGONS TEA. Filmed in glorious 4K and inside the forbidden heart of Wuyi Shan, the birthplace of Oolong and Black tea, this full-length documentary unearths tea’s long-buried secrets.

Passionate about tea, Christy loves to talk about this world-changing beverage with fellow tea lovers as a way to celebrate this divine plant. She is available for bookings both on stage and online. Christy pens a tea blog and hosts regular 9 DRAGONS Tea Society gatherings.

Fluent in English and Chinese (both Cantonese and Mandarin), Christy earned her Executive MBA from the University of Southern California in Los Angeles. She’s an avid fan of cartoons, Chinese calligraphy, and karaoke.

Prior to becoming a filmmaker, I worked with media companies including Sony Pictures, DirecTV, and TV Guide. (You might not remember it, but Google it. Trust me; it was cool.) While at Sony, I was part of a small expatriate team in Hong Kong developing a pan-regional entertainment network named AXN.

In 2000, I founded ActionFliks Media, an award-winning studio with a simple goal: Create enduring entertainment for kids and families.

This endeavor taught me that successful franchises take more than just great ideas. It would help if you had a team of talented individuals and creative-forward networks to make things happen.

My other creations include XIAOLIN SHOWDOWN (produced by Warner Brothers Animation and aired on Cartoon Network worldwide), HULALA GIRLS, XIAOLIN CHRONICLES, and brand video storytelling for companies such as Amprion.

Interested in exploring a project together? Get in touch here.

I am a dreamer. Have been since I was a little girl growing up in China. My family moved to the United States when I was a teenager.

Shy and speaking embarrassingly poor English, I felt so out of place. Not just a foreigner or an alien, more like a “foreign alien.” I befriended burritos and blew up like a balloon. Seriously, my size doubled in 3 months. My self-confidence was shattered. My dreams were on life support. It was not pretty.

A combination of realizations catapulted me out of my collapse; I couldn’t squeeze into my jeans, didn’t understand what the other schoolkids said, and my young spirit was getting loud, “Christy, wake up! This is not who you are!”

So I sought a way out and discovered a new friend – not wrapped in a tortilla. The Tube! Television became my tutor. Watching TV was homework. For kids reading this today, TV is for after homework.

Climbing out of my fat-rut, adapting to a new culture, and learning a language during my teenage years taught me a valuable life lesson:

If life hands you lemons, make a lemonade empire!

This principle guides my life – a journey of constant change and personal/professional growth. And I wouldn’t have it any other way.

Thank you for visiting the 9 DRAGONS TEA website, and I hope to sip tea with you sometime…